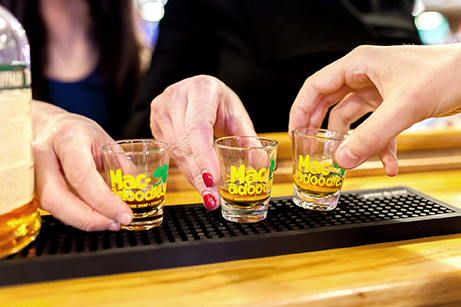 The world of liquor can be extremely confusing for novices. If you’ve ever felt confused about the different types of liquor, you’re not alone. Between determining the difference between whiskey and whisky and learning that scotch and bourbon are not the same, there is a lot to learn about liquor. This guide will thoroughly walk you through the many different types of alcohol, shed light on popular ways to drink them and inform you on the background of the various kinds of liquor.

This American whiskey variety is typically made from corn and barrel aged for a distinctive smoky, earthy flavor. Standards dictate that bourbon is at least 51 percent corn, aged in charred oak barrels for no less than two years and manufactured in the United States.

Popular ways to drink bourbon include:

Neat (alone), with water, on the rocks (with ice) or in a mixed cocktail, such as a Manhattan or Old-Fashioned.

What’s the difference you ask? Cognac is from the Cognac region of France, whereas brandy can be made anywhere in the world. Regardless of the origin, these fermented fruit juices are often made from grapes, but today, you’ll find an assortment of other fruit bases such as apples, pears, peaches, oranges and other sweet fruits.

Popular ways to drink brandy include:

Neat – you can also heat the Brandy over an open flame to enhance its flavor, or in a cocktail, such as a Metropolitan, Sidecar or a Champagne Cocktail.

This grain-based alcohol has been around for more than 400 years and receives its predominant flavor from juniper berries. It was the most popular spirit made during Prohibition and is one of the broadest categories of spirits.  Gin is a natural for cocktails with a wide range of ingredients and many new gins are hitting the market capitalizing on popular flavor profiles.

Popular ways to drink gin include:

Neat or on the rocks. Perhaps the most popular mixed drink – gin and tonic, Tom Collins or a Gin Sling.

Rum comes in a wide range of light, gold, spiced and dark profiles. The lighter rums (white, blanco or silver) are milder in flavor, while the darker varieties have been distilled for longer periods of time and have caramel or molasses undertones. Spiced rums continue to grow in popularity thanks to infusions of cinnamon, anise, rosemary, nutmeg, cherries and almonds, among others.

Popular ways to drink rum include:

Made from malt or grain this whisky is not only spelled differently than American whiskey, it has a distinctive smoky flavor. Single malt or blended varieties are available – single malt scotch is made with just water and 100% barley and is made from 2 or more single-malt whiskies produced at different distilleries.

Popular ways to drink scotch include:

Neat or with water

Tequila is made from blue agave and in Mexico.  There are five types of tequila: silver, gold, reposado, anejo and extra anejo.

Vodka is a clear distilled beverage comprised mostly of water and ethanol.  Most vodka originates from Poland or Russia and it’s the most popular spirit in the United States for its versatility.

Popular ways to drink vodka include:

Neat or chilled in the freezer, vodka tonic, screwdriver and vodka-based shots, such as a Lemon Drop.

We want to know more about you and the products you love. Telling us about what you like will help us get you the best deals and access to new products.